Last year, we were overwhelmed with the kindness and generosity by the community. We would like to thank all the businesses, churches, interest groups, school communities, allied health organisations, families and individuals who made this possible.

AV’s Toy and Food Appeal runs from October to December every year. The appeal promises every child in care a brand new toy for Christmas – a time that is most challenging for those who rely on organisations such as AV.

One mother explained that receiving a Christmas hamper meant she could put her money towards other things that the family needed. Elsewhere, a family and their friends donated 15 bikes, three of which were redistributed to a sibling group who needed them for the ride from home to town to catch the country school bus. 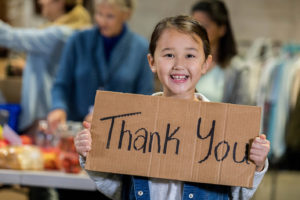 Below is a special story from the Toy and Food Appeal:

In the months leading up to Christmas, Mathew, a seven-year-old boy, fed the family chickens. He would sell their eggs to earn pocket money, which he then used to buy gifts for other children. He didn’t want anyone to miss out at Christmas.

Later, on December 20th as the Toy and Food Appeal gifts were distributed, a brightly wrapped present found its way into the hands of Jessica, an eight-year-old girl currently supported by AV. She held it for a moment, then ran with it into the next room. When she came back empty-handed, she told her caseworker that she put it under the tree to open on Christmas morning because “It might be the only one I get.”

Perhaps that one was from Mathew.