Quick Exit
To leave this website quickly, click the 'Quick Exit' button. If you are in immediate danger call 000 (Australian emergency line), for advice about family violence call 1800 Respect on 1800 737 732 (Helpline).
Accessibility
+ Language

When Buldau Yioohgen’s new Cultural Engagement Officer, Uncle Les Corlett, went on a trip to Walhalla in Gippsland with Aunty Kellie recently, he was surprised to see a familiar face painting under a bridge.

Uncle Les has known leading Aboriginal artist Uncle Ray Thomas for years, and even commissioned him to do a huge painting for the Children’s Court of Victoria. Uncle Ray is a proud Gunnai man. He is a highly acclaimed, self-taught Victorian Aboriginal artist. Uncle Ray has won numerous awards as a painter with his works of art incorporating traditional Gunnai designs and imagery. His work includes large murals at the Northcote Town Hall, VAHS and several wall murals behind the Aboriginal Advancement League. Last year his work was even featured on an art tram for Melbourne’s RISING festival.

In Walhalla, Uncle Les asked Uncle Ray whether he would run BY’s first ever painting workshop for Aboriginal young people from Anglicare Victoria. He didn’t hesitate to accept. 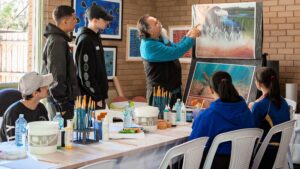 Uncle Ray Thomas pointing to his portfolio in front of young workshop participants.

In November a keen group of young people gathered at the Darrango yan-dhan Cultural Centre in East Melbourne, with Uncle Ray guiding them to paint animal totems. Even Aunty Kellie, who claimed not to be very good at art, did a Deadly painting of Bunjil the Eagle Creator with Uncle Ray’s help. 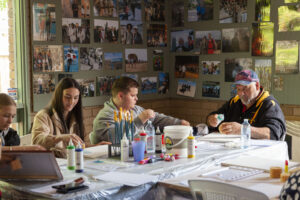 Workshop participants getting ready to paint with Uncle Ray.

“All the young people and staff had a lot of fun exploring their artistic skills. Uncle Ray was amazing, inspiring those who came along and helping them to paint different totems. It was fantastic to see everyone connecting and exploring their culture through his painting and his teaching, so hopefully this will be the first of many workshops,” Aunty Kellie said. 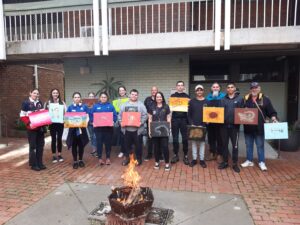