Anglicare Victoria is successfully demonstrating that there is still more that can be done for families who are at risk of losing or relinquishing custody of their children. Rapid Response (RR) is an innovative program designed by Anglicare Victoria to effect major turnarounds in struggling families previously believed to be at a point of no return.

It’s 10 o’clock on a sunny November morning in the Western region of Victoria. Anglicare Victoria’s Rapid Response (RR) team leader and worker have just arrived at a mother’s flat with two Child Protection (CP) workers. They can see dirty nappies and smell urine. There is broken glass on the floor. A toddler walks by. The mother, Joanna*, has lost control – unable to cope with the trauma of violence from her ex-husband. Heartbroken and despondent, she is about to lose her children too. It is at this moment that the RR team do what they do best.

The RR team received a referral from CP just 24 hours prior. By responding immediately and effectively, there is a high chance that the safety of the environment and carer’s behaviour (or
child’s behaviour depending on the case) can be strengthened to a safe standard − meaning the children can remain with her. Everyone is better off this way: the children, the parents, and the agencies that fund our over-stretched Out of Home Care system. 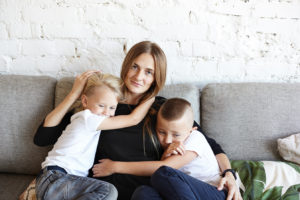 The RR team get to work straight away, working with clients to explain the safety goals set by Child Protection and required to be reached by the conclusion of the intervention. The RR team will visit for up to 15 hours a week; for four weeks in a row. They demonstrate, educate, role-model and support parents and their children to adjust behaviour, using evidence-based tools and techniques for improved familial relationships.

In one successful RR case, a father who had used excessive physical discipline on his young child was supported to see the childs fiery behaviour as a reactive call for attention, helping him to become more attentive to her emotional needs. In another family, a young teenager that was frequently threatening and violent towards her parents and siblings was supported to communicate
better the complex emotions she had experienced while growing up around violence.

Fortunately, working with Joanna ended positively too. The RR worker saw an incredible transformation: by the second week, each morning as they arrived, she would be there, bucket in hand ready to clean. As her confidence increased, she started proactively addressing the safety issues, and the children were able to remain in her care. Joanna spoke of her appreciation in the approach of RR workers: rather than a checklist of requirements, the workers listened and heard what she needed, referring services that she wanted, thereby improving the engagement of the service.

“Everybody has strengths, but they can’t always see that. During the interventions, RR workers slowly step back, and the family start to take over and lead − it’s a huge thing to see; it’s amazing.” Eliza Todd, Practice Leader.

The program has secured additional funding for expansion in the coming year, allowing the North and West regions to establish independent sites. Evolving the program towards evidence-based practice is underway, which will ensure that all regions operate to the same high standards.