Informed by a number of international evidence based models, Rapid Response works intensively with families, in their own home, over a four-week period. It’s proven to stop young people being placed in out-of-home care and keep families together.

Sue and Paul were worried. Their six year old son, Benny, was on the way home from the local Child and Adolescent Mental Health Service where he had been staying as an inpatient.

Benny had been showing frequent significant challenging and aggressive behaviours and Sue and Paul were worried about the safety of their youngest child, David, who was only one year old.

Child protection services were also concerned about family safety and were considering making a Protection Application to the court to separate them. Instead, they referred the family to Rapid Response, so that AV could support the family to make the home safe. 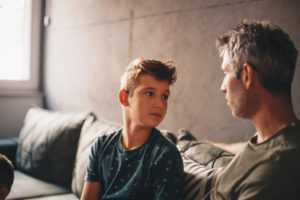 Although Sue and Paul had reservations about taking part in such an intensive program they agreed.

AV’s Rapid Response team worked with the family for four weeks developing a safety-focused plan alongside the child protection team, and providing in-home support to address the crisis. The team helped the family to develop their parenting skills, as well as connecting them to longer term support services.

Sue and Paul reported that Benny’s aggression had decreased significantly. They were feeling confident that they could manage and were less anxious and more hopeful about the future. Paul said the outcome was beyond his expectations, and though there might be more problems, he would seek support if he needed to in the future.

Paul and Sue are now working to transition Benny back to school, and child protection services are no longer considering separating the family. Rapid Response has grown quickly, and was available in four metropolitan and two regional areas in 2020. Our data is showing very positive results for the nearly 370 families who have taken part, with over 90% remaining with their parents at completion.

Learn more about Anglicare Victoria’s Early Intervention Programs or about the recognition of Rapid Response in the HESTA Community Sector Awards.