When Father Siosifa ‘Joe’ Tongia meets a young person in a youth justice centre he never asks them what they have done. 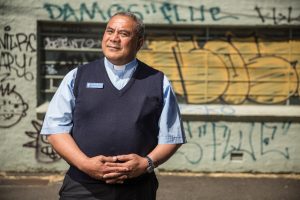 “I’m not there to be the court,’’ he says. “I’m there to find a way to engage with young people and give them hope for the future. If you have hope, you can love and you can believe in and trust yourself.’’

In his role as chaplain with the Anglican Criminal Justice Ministry parish partnership, Father Joe provides pastoral care to some of Victoria’s most vulnerable children.

When Father Joe was first approached about the role in 2015 it was thought that his Tongan heritage would help build rapport with young people from Polynesian backgrounds.

However, when he first arrived at Parkville Youth Justice Centre he found it difficult to connect. But he didn’t give up or force his presence, taking an approach of waiting patiently for young people to come to him.

His perseverance paid off and as his reputation grew he started to get requests to visit young people who were transferred to Malmsbury, and then to help young people in times of need after being released.

Father Joe often receives Christmas, Mother’s and Father’s Day cards from young people, and was asked by one young man to pray for him when he was released, so he could be ‘better than when he went in’.

“At the start it was very difficult but if you take a little bit of time and listen to young people, slowly the real stories about their situations come out,’’ Father Joe says.

Father Joe is saddened that so many of the young people he meets do not have families who can support them – either when they are in prison or when they are released.

“When they are released they end up going straight back to where they started in the first place,’’ he says, recounting the story of a young man who returned to jail only a couple of hours after his release because he had nowhere else to go.

He praises the efforts of Anglicare Victoria and other agencies who work with young people but remains concerned that too many young people find themselves alone.

“Young people need someone to listen to them, to follow them, guide them and support them to study and find a job. We need to encourage them to value themselves.”