Thanks to the love and support of their Grandma Ali, three young brothers – Nick (11), Sean (8), and Harry (5)* – will be able to stay together under the same roof.

Home had become violent and unsafe for the three children. Their parents had fallen into a drug addiction, and the children were often left to fend for themselves. Nick would pour out cereal for dinner for his brothers; they would eat out of Tupperware containers as there was no crockery. 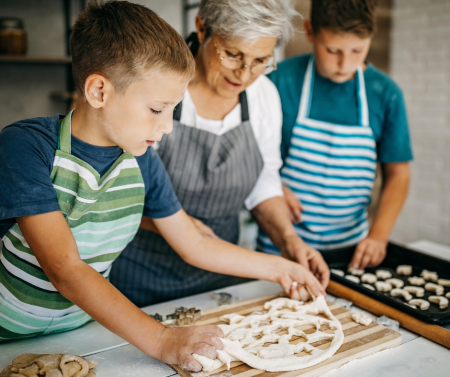 When it became clear their parents weren’t ready to do something about their addiction, child protection intervened. AV was contacted, and our case manager Elizabeth began working with the children initially to support their education. She attended school support meetings, checked in with them at kinder, provided practical support for the family. She provided funds for their uniform, school books and resources for playtime, such as a play mat and trampoline. Shortly after, the children were moved to temporary care with their Grandma.

“Nick and Sean were struggling with school. We were able to link them into extra educational services. We built long term rapport with the children, and the school to ensure they receive the support they need. We are aiming to get them to a self-sufficient place.” — Elizabeth, Case Manager

This year Ali decided she would be able to provide permanent care for her grandchildren. Elizabeth has supported her in this lengthy process and will soon deliver official certificates to each of the children – along with a teddy bear.

Ali is relieved that she has care and permanent support for the kids and said she “couldn’t bear to see them go into the foster care system. I want to be the person to put their needs first. Nick was jumping up and down with excitement when he found out that he could stay with Grandma Ali full time.”

*The story is true, but the children’s names have been changed.